As far as Golden Retrievers are concerned, life is just one big party, and they feel they are the guest of honor at that party. Most of the people they meet along the way, are just more guests for their party. 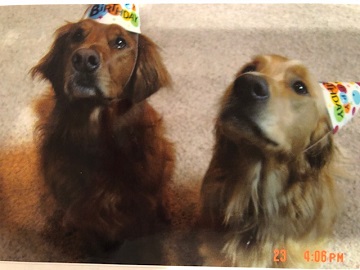 One party after another in a Golden’s world

Let’s take a look at what is the Golden Retriever personality. There must be more to life than just a party, or is there?

Characteristics Of The Golden Retriever

Are Golden Retrievers Friendly To A Fault

Golden Retrievers are considered friendly, outgoing and exuberant. It is just their outlook on life. At times some Golden Retrievers might even be considered to be overly excited or hyper. They often times have a high level of energy, but that can usually be easily controlled and most will calm down quickly.

Golden Retrievers don’t like to be ignored. If you give them some exercise and some one-on-one attention, they will normally calm down quite quickly. Because of how friendly they are, they do expect people to be as excited to see them as they are to see people. They have a hard time understanding someone who isn’t glad to see them. 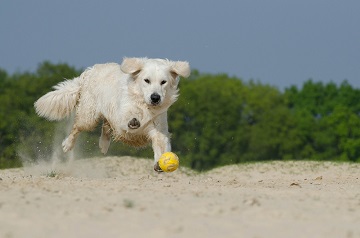 Unlike some breeds that tend to be one-person or one-family oriented, a Golden shares his affections freely with many. He will form an especially strong bond with the person who is his primary caretaker or spends the most time with him, but never excludes others.

Because of this trait of overt friendliness, Goldens typically do not make good guard dogs. They generally aren’t excessive barkers and are likely to greet a stranger with possibly a bark and wag its tail in greeting. There is an old saying that a Golden Retriever will show a thief where the valuables are and then help them carry it out.

How A Golden Retriever Shows Happiness

Unless a Golden Retriever isn’t getting the attention that they need, they are always happy. Goldens don’t like to be left alone for long periods of time and they like to be included in whatever activity you are involved in.

It is very easy to see the happiness that they have. They are almost pouring it out of their body to you. Let’s start with the tail wag and wiggly butt. The littlest activity can get your Golden Retriever excited. It can be you picking up one of their toys, talking to them, coming home and at times it might just be you looking at them. 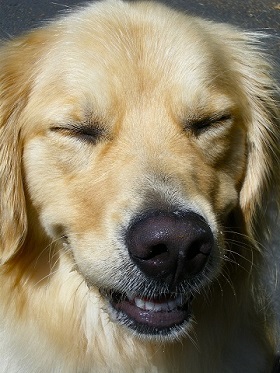 They have the biggest tail wag when they are showing their joy. They will work their tail so hard that it moves all the way into their butt and the whole back end will start wiggling around. Make sure not to have breakable on a low table, because they can easily knock stuff off the table with their tail.

And if that isn’t enough of a way to show their happiness, many Golden Retrievers actually smile. I am talking a full on smile, with lips pulled back and showing their teeth. Generally, you will only be rewarded with their very comical smile when you first walk in the door or as your Golden Retriever is greeting other people. It will make you laugh every time you see it.

Golden Retrievers Are Trustworthy And Trusting

Goldens are good with all ages and all family members. That is why they are considered one of the best dogs for kids and families. My son grew up with 2 Golden Retrievers that were only 7 months older than him. They were always very patient with him and would tolerate anything that he would do with them, including him using them for a pillow.

Children and Goldens are almost a natural pair. They both will be delighted with each others companionship. Kids will be an extra moving body that is eager to run around with your dog. Once again, life is a party to them, and running around with kids is a big celebration for them.

Golden Retrievers naturally seem to trust humans. That is why they are favorite clients of veterinarians and dog groomers. They are also very forgiving. They will take getting corrected in stride, learn from it and be just as happy with you as they were before your corrected them.

Not only do Goldens crave affection, they will demand it. As a whole, males tend to be more attentive and affectionate than females, who are often more independent in nature. You can find more differences between male and female Golden Retrievers here if you are interested. 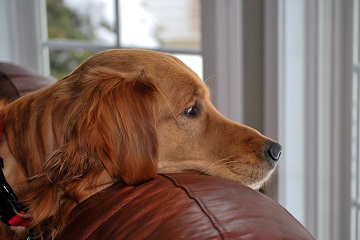 Goldens will want to be petted and then insist that their paws be held for hours at a time. The more insistent ones will stick their noses under an arm and give a forceful nudge until attention is focused totally on them. If you are willing and allow it, they are happy to climb in your lap and lie contently for hours, forgetting they are not the size of a normal lap dog.

Licking can also be an annoying habit that some Golden Retrievers can take to extremes. This is not just licking themselves, but humans as well. They will lick your hands or even your face if it is in reach, and are delighted in covering you with sloppy kisses.

Golden Retrievers were bred to retrieve things and their natural instincts will lead them to spend a good deal of time looking for and carrying any object it finds in its mouth. Things suitable for retrieval can be described as anything within reach that is not nailed down. Their greatest joy from this is you chasing them around trying to get it back.

Children’s toys, shoes, socks and dirty underwear are all likely targets for your retriever’s mouth. Goldens are known for their gentle mouths, but along the way tooth marks may appear on many of these items.

Not only do Goldens like carrying objects, you might have a Golden Retriever that likes to hold your arm or your hand in their mouth when walking with you. One of my Golden Retriever’s used to grab my son’s hand whenever he got off the bus and walk him to the door. This isn’t an uncommon practice with Golden Retrievers. 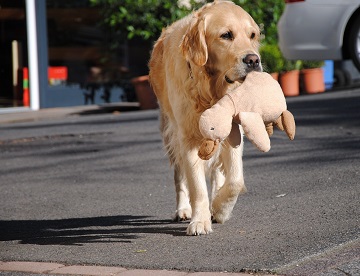 When looking at what is the Golden Retriever personality, it is no wonder why they are such beloved family members. Every Golden is unique and slightly different. Some are bold and inquisitive, challenging everything, checking kitchen counters or refusing to take “no” for an answer. While others will wait patiently for life to happen.

Every Golden Retriever that I have met really loves life and all that is around them. They are truly special dogs. It is safe to say that once you owned a Golden Retriever, life without a Golden is never the same.